In a previous post, we discussed the relationship between accuracy and robustness for separated data. A classifier trained on $r$-separated data can be both accurate and robust with radius $r.$ What if the data are not $r$-separated? In our recent paper, we look at how to deal with this case.

Many datasets with natural data like images or audio are $r$-separated [1]. In contrast, datasets with artificially-extracted features are often not. Non-parametric methods like nearest neighbors, random forest, etc. perform well on these kind of datasets. In this post, we focus on the discussion of non-parametric methods on non-$r$-separated datasets.

Let us start by visualizing the decision boundaries of a $1$-nearest neighbor ($1$-NN) and a random forest (RF) classifier on a toy dataset. 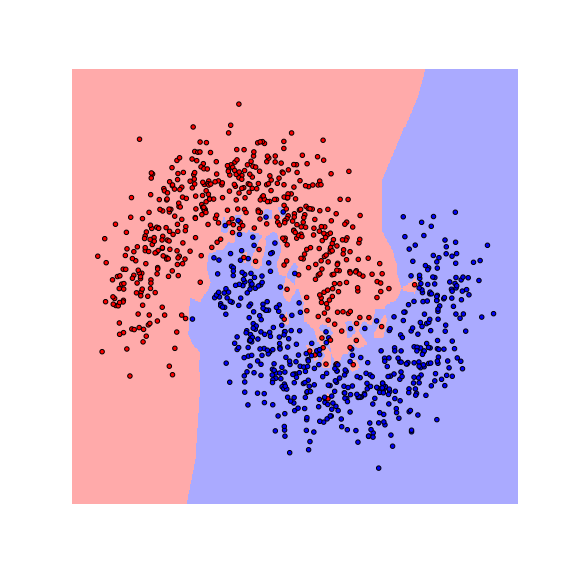 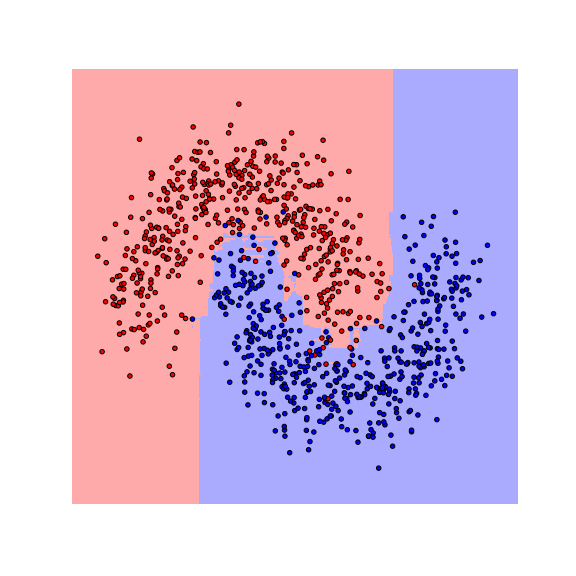 We see that the decision boundaries are highly non-smooth, and lie close to many data points, resulting in a non-robust classifier. This is caused by the fact that many differently-labeled examples are near each other. Next, let us consider a modified dataset in which the red and blue examples are more separated. 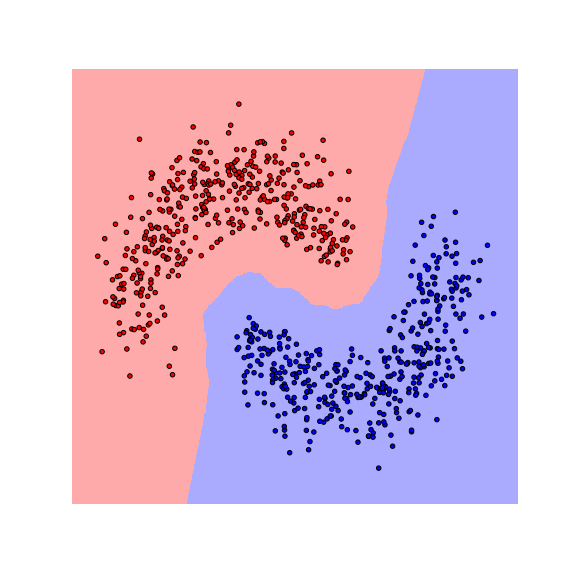 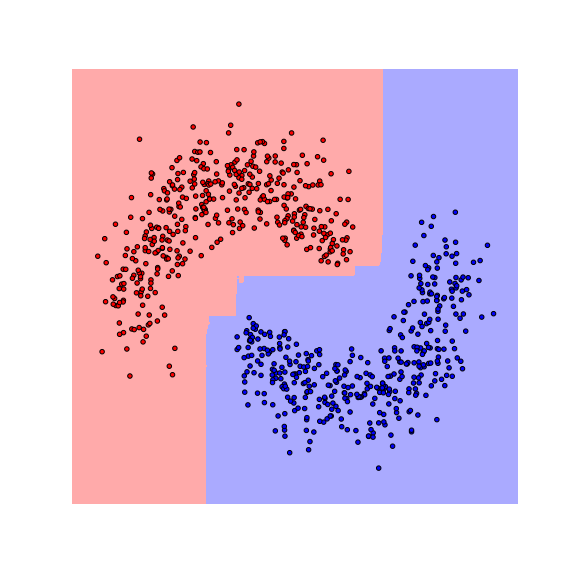 Notice that the boundaries become smoother as examples move further away from the boundaries. This makes the classifier more robust as the predicted label stays the same if data are perturbed a little.

From these figures, we can see that these non-parametric methods are more robust when data are better separated. Given a dataset, to make it more separated, we need to remove examples. To preserve information in the dataset, we do not want to remove too many examples. We design our defense algorithm to minimally remove examples from the dataset so that differently-labeled examples are well-separated from each other. After this modification, we can train a non-parametric classifier on it. We call this defense algorithm adversarial pruning (AP).

More formally, given a robustness radius $r$ and a training set $\mathcal{S}$, AP computes a maximum subset $\mathcal{S}^{AP} \subseteq \mathcal{S}$ such that differently-labeled examples in $\mathcal{S}^{AP}$ have distance at least $r$. We show that known graph algorithms can be used to efficiently compute $\mathcal{S}^{AP}$. We build a graph $G=(V, E)$ as follows. First, each training example is a vertex in the graph. We connect pairs of differently-labeled examples (vertices) $\mathbf{x}$ and $\mathbf{x}’$ with an edge whenever $|\mathbf{x} − \mathbf{x}’| \leq 2r$. Then, computing $\mathcal{S}^{AP}$ is reduced to removing as few examples as possible so that no more edges remain. This is equivalent to solving the minimum vertex cover problem. When dealing with binary classification problem, the graph $G$ is bipartite and standard algorithms like the Hopcroft–Karp algorithm can be used to solve this problem. With multi-class classification, minimum vertex cover is NP Hard in general, and approximation algorithms have to be applied.

It happens that Adversarial Pruning has a nice theoretical interpretation - we can show that it can be interpreted as a finite sample approximation to the optimally robust and accurate classifier. To understand this, first, let us try to understand what the goal of robust classification is. We assume the data is sampled from a distribution $\mu$ on $\mathcal{X} \times [C]$, where $\mathcal{X}$ is the feature space and $C$ is the number of classes. Normally, the ultimate limit of accurate classification is the Bayes optimal classifier which maximizes the accuracy on the underlying data distribution. But the Bayes optimal may not be very robust.

For more about the $r$-optimal classifier, please refer to this paper.

The attack algorithm is called region-based attack (RBA). Given an example $\mathbf{x}$, RBA can find the closest example to $\mathbf{x}$ with different prediction, in other words, RBA achieves the optimal attack. In addition, RBA can be applied to many non-parametric methods while many prior attacks for non-parametric methods [1, 2] are classifier specific. 1 only applies to $1$ nearest neighbors and 2 only applies to tree-based classifiers. 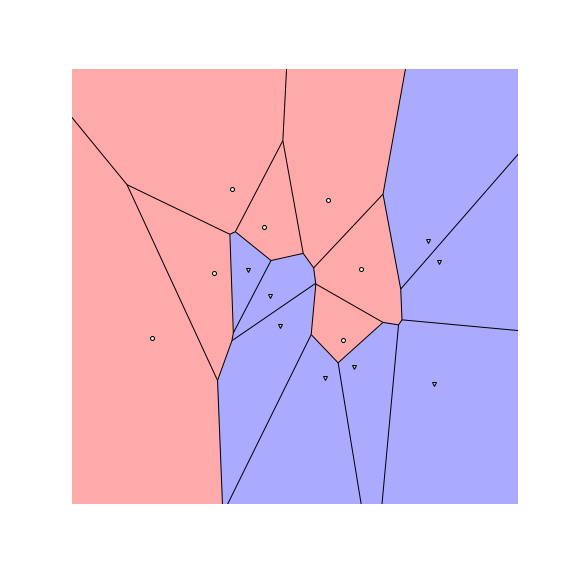 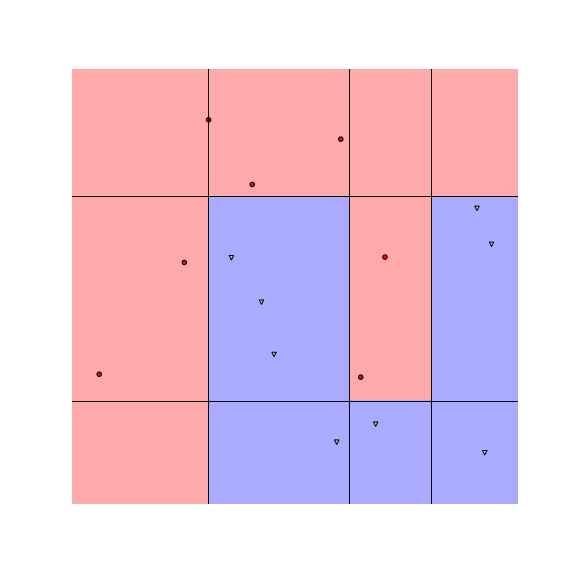 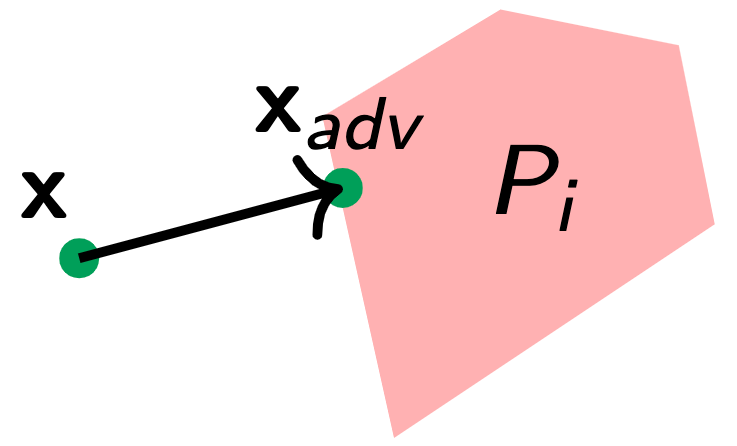 To understand how RBA works, let us look at the figures above. The figures above show the decision boundaries of $1$-NN and decision tree on a toy dataset. We see that the feature space is divided into many regions, where examples in the same region have the same prediction (meaning we can assign a label to each region). These regions are convex for nearest neighbors and tree-based classifiers.

Interestingly, concurrent works [1, 2, 3, 4] have also shown that the decision regions of ReLU networks are also decomposable into convex regions and developed attacks based on this property.

We develop an approximate version of RBA (RBA-Approx.) to speed up the process and make our algorithm applicable to real datasets. We relax the $\textcolor{red}{\text{outer $min$}}$ by iterating over only a fixed number of regions based on the following two criteria. First, a region has to have at least one training example in it to be considered. Second, if $\mathbf{x}_i$ is the training example in the region $P_i$, then the regions with smaller $\|\mathbf{x}_i - \mathbf{x}\|_p$ are considered first until we exceed the number of regions we want to search. We found that empirically using these two criteria to search $50$ regions can find adversarial examples very close to the target example.

We empirically evaluate the performance of our attack (RBA) and defense (AP) algorithms.

Evaluation criteria for attacks. We use the distance between an input $\mathbf{x}$ and its generated adversarial example $\mathbf{x}_{adv}$ to evaluate the performance of the attack algorithm. We call this criterion empirical robustness (ER) The lower ER is, the better the attack algorithm is. We calculate the average ER over correctly predicted test examples.

Evaluation criteria for defenses. To evaluate the performance of a defense algorithm, we use the ratio of the distance between an input $\mathbf{x}$ and its closest adversarial example being found before and after the defense algorithm is applied. We call this criterion defense score ($\text{defscore}$). More formally,

We calculate the average defscore over the correctly predicted test examples. A larger defscore means that the attack algorithm needs a larger perturbation to change the label. Thus, the more effective the defense algorithm is. If the defscore is larger than one, then the defense is effectively making the classifier more robust.

From the result, we see that the RBA algorithm is able to perform well across many non-parametric methods and datasets (for results on more datasets and classifiers, please refer our paper). For $1$-NN, RBA-Exact performed the best as expected since its optimal. For $3$-NN and RF, RBA-Approx. also performed the best among the baselines.

Defenses. For baseline, we consider WJC for the defense of $1$-NN and robust splitting (RS) for tree-based classifiers. Another baseline is the adversarial training (AT), which has a lot of success in parametric classifiers. We use RBA-Exact to attack $1$-NN and RBA-Approx to attack $3$-NN and RF for the calculation of defscore.

See our paper on arxiv or our repository.